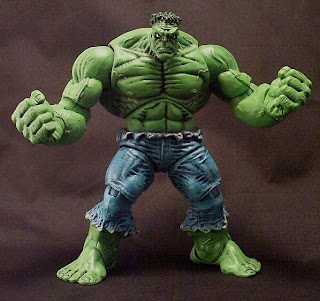 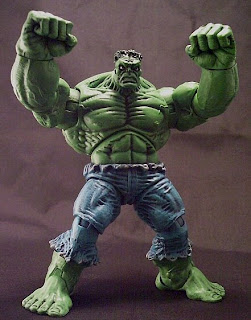 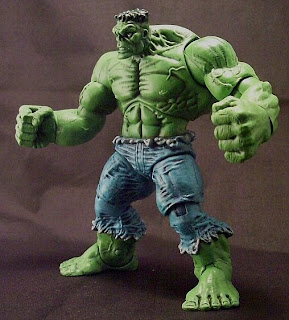 I simply couldn't take looking at the single pack Hulk I aquired recently any longer with his crossed eyes and crappy paint job so I gave him a repaint. The only other thing I did here is swap the left fist and gave the open hand to the comic pack Hulk.So here is my Hulk...
Posted by Stronox at 1:07 AM No comments: 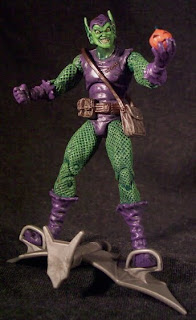 I wasn't happy with the paint on my Green Goblin figure so I gave him a repaint darkening him up a bit and bringing out the scales of his suit more. I added a Joe belt to give him a more defined belt and also re-did his goblin hat tail so that it wasn't curled straight up in the air anymore and more swept back. Hope you guys like!
Posted by Stronox at 1:04 AM No comments: 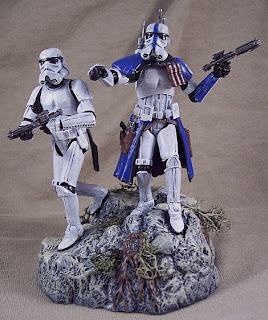 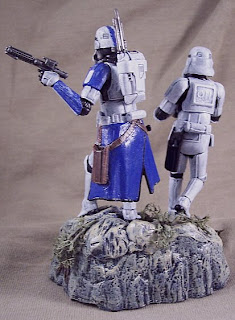 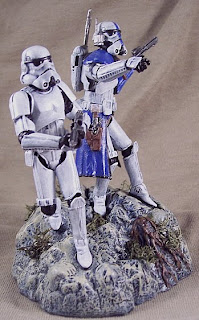 I saw a Stormtrooper concept custom made by another customizer, and eerily I had one in the works similar to his. Regardless, I had to have one for my own collection. I like the idea of differently styled Stormtroopers after all, the clones had various armors in the movies.
Posted by Stronox at 3:40 PM 1 comment: 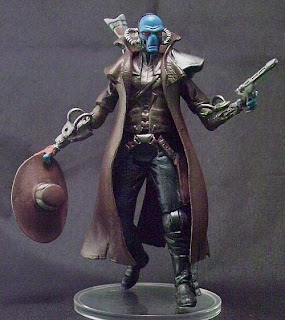 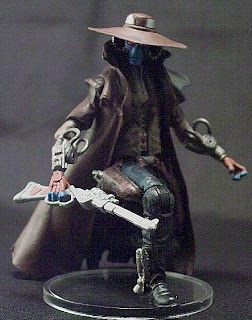 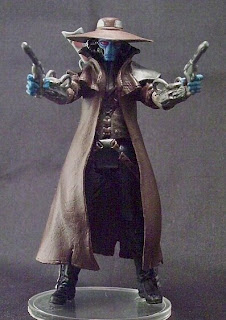 I wasn't too pleased with the version of Cad Bane that Hasbro put out, so I made some improvements. First, I gave him articulated knees so he could do more than just stand there straight legged. Then I swapped out his coat, gave him some better pistols, and added a holster to the back of his jacket for his rifle. Some paint apps and voila! A much better Cad Bane in my opinion.
Posted by Stronox at 4:38 PM 9 comments: 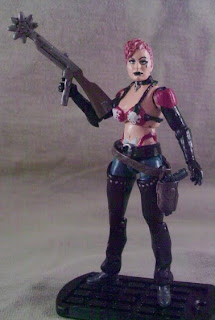 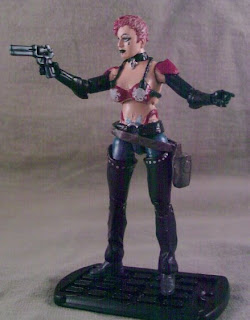 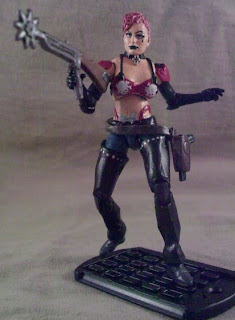 I have never been a big fan of the Dreadnoks, until I saw some absolutely jaw dropping artwork by artist Wry1. I asked him if I could make the Noks based on his drawings, so here is my first, Zarana...
Zarana was made from a RoC Cover Girl head, 25th Scarlett torso, some Star Wars lady for the arms, Cobra Commander legs, Darth Talon’s feet, and various items from the old fodder box. I did sculpt work on the hair, cross on the choker, torso, legs, and a small extension of the pants at the bottom. I took some creative liberty here and left the shoulder pads in place since I like the look with them. Hope you all like!
Posted by Stronox at 1:39 PM 1 comment:

The House That "Father" Built 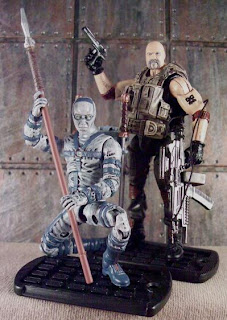 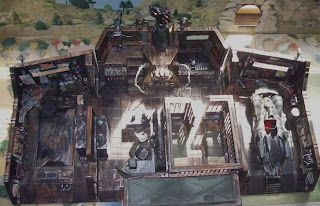 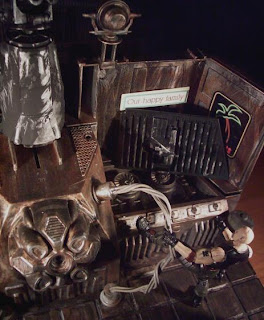 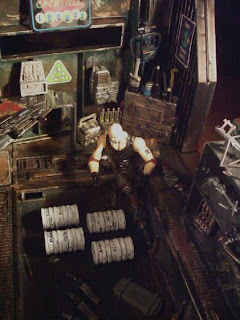 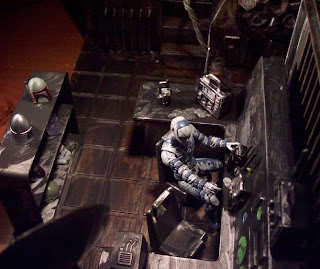 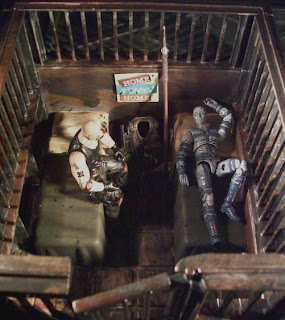 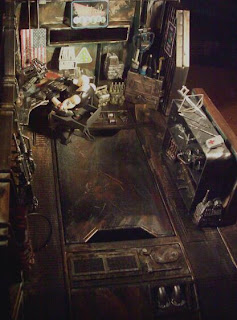 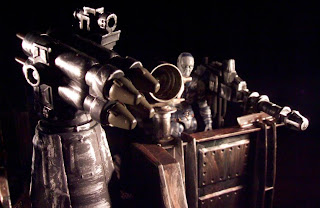 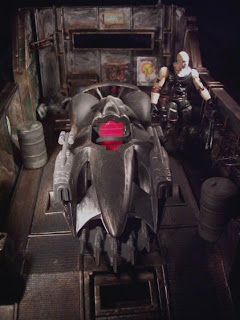 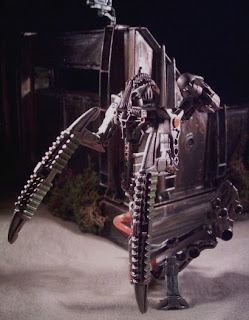 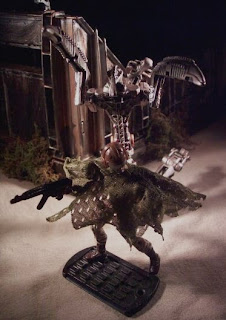 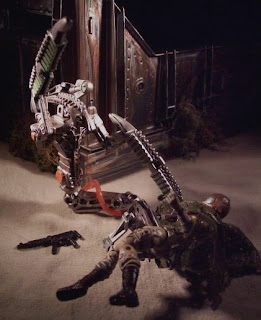 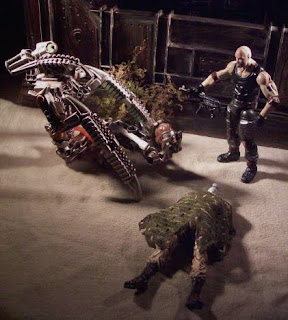 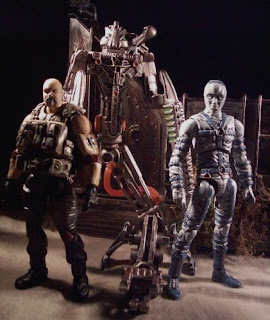 Once upon a time in the barren New Earth,
There lived a Father and Son of no known worth.
Taking an abandoned fortress for their home,
They fortified it against the things that roam.
Many parts were recovered from bits of scrap they found,
Making things useful all around.
Smart was the father, he could make things work,
And when they were hungry they ate beans and pork.
Broken old radios, various equipment and gear,
Hearing communications in advance helped lessen any fear.
When they slept at night it was in an old jail cell,
For you can’t be too careful in this earth that is hell.
Working away at making his guns,
The man called Father does this for fun.
Sonny Boy keeps watch in his perch up top,
If any get too close, they are bound to be shot.
A garage for repairing and making mods,
Father is making his boy a new hot rod.
Outside the base, an added protection,
That guards them both with utmost perfection.
They call him old Chuck and he is a machine,
He attacks anything making it too close as his sensors are keen.
Ripping and tearing he does with his blades,
Then at Father’s feet the remains are laid.
Life is sure hard, and New Earth is tough,
But having a place to call home for these three is enough.
Posted by Stronox at 2:09 PM 2 comments: 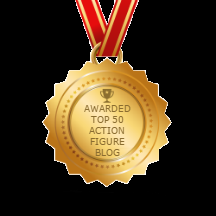